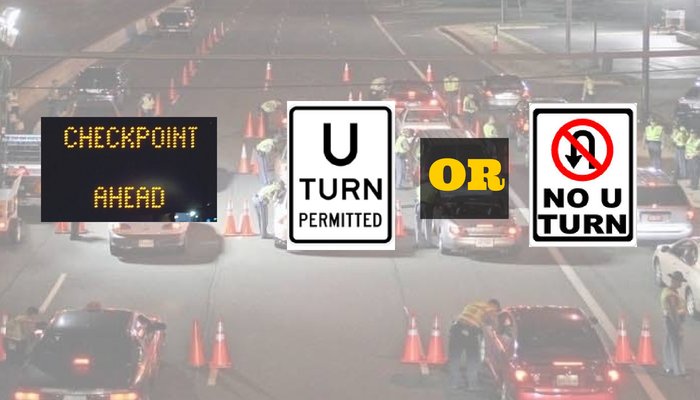 Is it Possible to Avoid DUI Checkpoints Legally?

The case gives us a mixed bag of results. Technically, the case makes it clear that a person CAN legally avoid a DUI checkpoint.

Strictly speaking, the police cannot stop a car just because that car is seen making a U-turn to avoid a traffic safety checkpoint. Great, sounds like good news for drivers and the defense bar.

Yes, But Car Can Still Be Stopped If…

There are three examples of when a turn before a safety checkpoint reaches a reasonable suspicion of criminal activity allowing the police to stop the car before they can actually get away:

(1) When a vehicle tries to go through the checkpoint without stopping at all;
(2) When a vehicle stops just before the roadblock and the driver and passenger change places; or

(this is my favorite point)

(3) When a vehicle avoids the roadblock in a suspicious manner

I love number three. Message to the police is this: “Look guys look for any other reason that you can put into a sentence and write down for us.”

What is a Suspicious Manner?

The court itself described point number three this way: “What is considered suspicious has been subject to much debate, with results varying by jurisdiction.”

I would also add, that what is considered suspicious also varies widely by the judge who is happens to catch the case.

The court briefly discussed some of the “suspicious” activities that would justify a stop. First and foremost, any traffic infraction committed while trying to “get away.” Would be a legitimate reason to stop the car.

The court suggested that setting up the checkpoint in a “high-crime area” could also provide the necessary suspicion to stop evading cars.

Finally, the court would accept any evidence of a car trying to make any kind of fast get-a-way. For example if the police see the car speeding, squealing tires, or spraying gravel that would all suggest flight for some reason.

If I’m a cop tasked with putting up the next DUI or traffic safety checkpoint I’d look for a high crime area, where U-turns are illegal and extra gravel on the side of the road. That will teach drivers to try avoid DUI checkpoints legally.