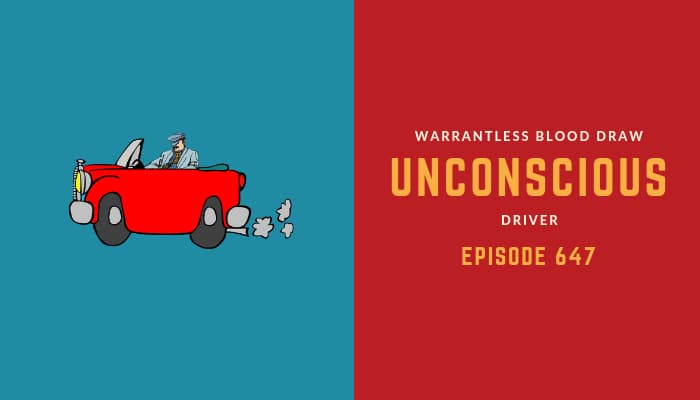 Get Caught Up With
All The Most Current & Important
Illinois DUI Cases.

Police get a call of a very drunk man driving off.

Man is found near a lake stumbling and slurring his words.

He could hardly stand without the support of two officers. Field sobriety tests were hopeless, if not dangerous, but he could blow for a preliminary breath test. It registered a BAC level of 0.24%, triple the legal limit for driving in Wisconsin.

He is arrested for operating a vehicle while intoxicated and, as is standard practice, drove him to a police station for a more reliable breath test using better equipment. By the time the squad car had reached the station, he was too lethargic even for a breath test.

Police drove him to the hospital instead.

Defendant lost consciousness on the ride over and had to be wheeled in. Police asked hospital staff to draw a blood sample. Mitchell remained unconscious while the sample was taken, and analysis of his blood showed that his BAC, about 90 minutes after his arrest, was 0.222%.

We granted certiorari, 586 U. S. ___ (2019), to decide whether a statute authorizing a blood draw from an unconscious motorist provides an exception to the Fourth Amendment warrant requirement.

We held that their drunk-driving arrests, taken alone, justify warrantless breath tests but not blood tests, since breath tests are less intrusive, just as informative, and (in the case of conscious suspects) readily available. Id., at ___ (slip op., at 35).

Check out the Illinois DUI Resource Page
to learn more about DUI in Illinois.

We have also reviewed BAC tests under the “exigent circumstances” exception—which, as noted, allows warrantless searches “to prevent the imminent destruction of evidence.” Missouri v. McNeely, 569 U. S. 141, 149 (2013).

In McNeely, we were asked if this exception covers BAC testing of drunk-driving suspects in light of the fact that blood-alcohol evidence is always dissipating due to “natural metabolic processes.” Id., at 152. We answered that the fleeting quality of BAC evidence alone is not enough.

But in Schmerber it did justify a blood test of a drunk driver who had gotten into a car accident that gave police other pressing duties, for then the “further delay” caused by a warrant application really “would have threatened the destruction of evidence.” McNeely, supra, at 152 (emphasis added). See Schmerber v. California, 384 U. S. 757, 765 (1966).

Reasonableness Is The Standard

The Fourth Amendment guards the “right of the people to be secure in their persons . . . against unreasonable searches” and provides that “no Warrants shall issue, but upon probable cause.” A blood draw is a search of the person, so we must determine if its administration here without a warrant was reasonable.

The important question here is what officers may do when a driver’s unconsciousness (or stupor) eliminates any reasonable opportunity for a breath test.

Like Schmerber, this case sits much higher than McNeely on the exigency spectrum.

McNeely was about the minimum degree of urgency common to all drunkdriving cases. In Schmerber, a car accident heightened that urgency. And here this driver’s medical condition did just the same.

Here today the court addresses not the specific facts of this case but instead on how the exception bears on the category of cases featuring an unconscious driver. In those cases, the need for a blood test is compelling, and an officer’s duty to attend to more pressing needs may leave no time to seek a warrant.

While our exigent-circumstances precedent requires a “totality of the circumstances” analysis, “the circumstances in drunk driving cases are often typical, and the Court should be able to offer guidance on how police should handle cases like the one before us.” McNeely, 569 U. S., at 166 (ROBERTS, C. J., concurring in part and dissenting in part).

The bottom line is that BAC tests are needed for enforcing laws that save lives.

The specifics, in short, are these: Highway safety is critical; it is served by laws that criminalize driving with a certain BAC level; and enforcing these legal BAC limits requires efficient testing to obtain BAC evidence, which naturally dissipates.

So BAC tests are crucial links in a chain on which vital interests hang. And when a breath test is unavailable to advance those aims, a blood test becomes essential.

Dissipation Is Still A Thing

It must be noted that enforcement of BAC limits also requires prompt testing because it is “a biological certainty” that “[a]lcohol dissipates from the bloodstream at a rate of 0.01 percent to 0.025 percent per hour. . . . Evidence is literally disappearing by the minute.” McNeely, 569 U. S., at 169 (opinion of ROBERTS, C. J.). As noted, the ephemeral nature of BAC was “essential to our holding in Schmerber,” which itself allowed a warrantless blood test for BAC. Id., at 152.

When a breath test is unavailable to promote those interests, “a blood draw becomes necessary.” McNeely, 569 U. S., at 170 (opinion of ROBERTS, C. J.).

Thus, in the case of unconscious drivers, who cannot blow into a breathalyzer, blood tests are essential for achieving the compelling interests described above. Indeed, not only is the link to pressing interests here tighter; the interests themselves are greater: Drivers who are drunk enough to pass out at the wheel or soon afterward pose a much greater risk.

It would be perverse if the more wanton behavior were rewarded—if the more harrowing threat were harder to punish. For these reasons, there clearly is a “compelling need” for a blood test of drunk-driving suspects whose condition deprives officials of a reasonable opportunity to conduct a breath test.

The only question left, under our exigency doctrine, is whether this compelling need justifies a warrantless search because there is, furthermore, “no time to secure a warrant.”

So even if the constant dissipation of BAC evidence alone does not create an exigency, Schmerber shows that it does so when combined with other pressing needs:

“We are told that [1] the percentage of alcohol in the blood begins to diminish shortly after drinking stops, as the body functions to eliminate it from the system. Particularly in a case such as this, where [2] time had to be taken to bring the accused to a hospital and to investigate the scene of the accident, there was no time to seek out a magistrate and secure a warrant. Given these special facts, we conclude that the attempt to secure evidence of blood-alcohol content in this case [without a warrant] was . . . appropriate . . . .”

(1) BAC evidence is dissipating and
(2) some other factor creates pressing health, safety, or law enforcement needs that would take priority over a warrant application.

Both conditions are met when a drunk-driving suspect is unconscious, so Schmerber controls: With such suspects, too, a warrantless blood draw is lawful.

In Schmerber, the extra factor giving rise to urgent needs that would only add to the delay caused by a warrant application was a car accident; here it is the driver’s unconsciousness.

Indeed, unconsciousness does not just create pressing needs; it is itself a medical emergency. It means that the suspect will have to be rushed to the hospital or similar facility not just for the blood test itself but for urgent medical care.

Just as the ramifications of a car accident pushed Schmerber over the line into exigency, so does the condition of an unconscious driver bring his blood draw under the exception.

An Accident Could Cause Exigent Circumstance

In many unconscious-driver cases, the exigency will be more acute, as elaborated in the briefing and argument in this case. A driver so drunk as to lose consciousness is quite likely to crash, especially if he passes out before managing to park.

And then the accident might give officers a slew of urgent tasks beyond that of securing (and working around) medical care for the suspect. Police may have to ensure that others who are injured receive prompt medical attention; they may have to provide first aid themselves until medical personnel arrive at the scene.

In some cases, they may have to deal with fatalities. They may have to preserve evidence at the scene and block or redirect traffic to prevent further accidents. These pressing matters, too, would require responsible officers to put off applying for a warrant, and that would only exacerbate the delay—and imprecision—of any subsequent BAC test.

In sum, all these rival priorities would put officers, who must often engage in a form of triage, to a dilemma. It would force them to choose between prioritizing a warrant application, to the detriment of critical health and safety needs, and delaying the warrant application, and thus the BAC test, to the detriment of its evidentiary value and all the compelling interests served by BAC limits. This is just the kind of scenario for which the exigency rule was born—just the kind of grim dilemma it lives to dissolve.

When police have probable cause to believe a person has committed a drunk-driving offense and the driver’s unconsciousness or stupor requires him to be taken to the hospital or similar facility before police have a reasonable opportunity to administer a standard evidentiary breath test, they may almost always order a warrantless blood test to measure the driver’s BAC without offending the Fourth Amendment.

We do not rule out the possibility that in an unusual case a defendant would be able to show that his blood would not have been drawn if police had not been seeking BAC information, and that police could not have reasonably judged that a warrant application would interfere with other pressing needs or duties. Because Mitchell did not have a chance to attempt to make that showing, a remand for that purpose is necessary.

The dissent took issue with such a broad categorical approach in light of the most recent case law which seemed to counsel against such an approach.

The dissent also questioned whether there was really no time to go get a warrant. Isn’t there always time for that?