In this podcast episode, I discuss the no knock warrant. Is it logical? Does it make sense? Why do we have it? Listen in, to discover the answers to all these questions. But first…

What Exactly is a No Knock Warrant?

This is a rule in the criminal law. The rule is that before the police enter a dwelling to conduct a search they must first knock and announce their intent. 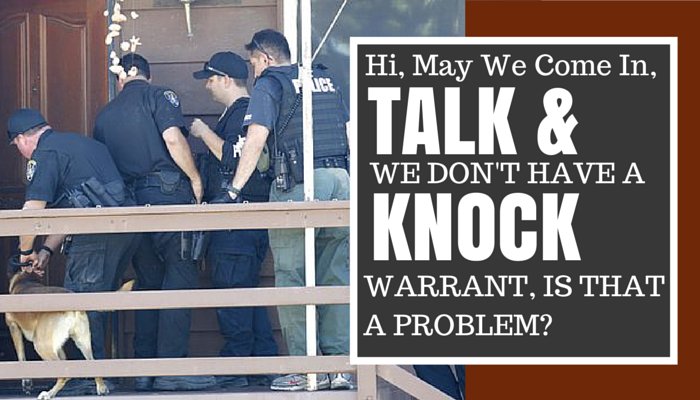 This is also called the knock and announce rule. If the police have a reason to believe that the subject of the warrant is violent or likely to destroy evidence, they can ask the judge signing the warrant for a no knock provision in the warrant. This is the no knock warrant that authorizes entering without knocking or announcing.

Reasons for the Rule

The courts have justified the existence of this rule for the following reasons:

American courts adopted and kept this rule from English common law procedures. The basic idea is that some people when they know the police are there will not resist. Some people will open the door and allow the search to take place peacefully. When this works it reduces violence between the police and the accused. Property is protected because the police don’t have to break doors and windows to get in the dwelling. Privacy & Dignity is honored because the person has time to get some clothes on, and the procedure is more cordial.

What Happens in Real Life

During the common law there was no indoor plumbing and very little ways actively resist.  Things are much different now. Everyone has a working toilet and sinks. And guns seem to be much more popular these days. Rarely, do the police have specific reasons to believe that the accused will flush drugs down a toilet when the knock comes. It does, however, seem to happen in a lot. So, the police knock and announce but the door gets broken down anyways because the homeowner has between 5 to 20 seconds to open the door.  The courts have said that is long enough. When was the last time you opened the door in 20 seconds? And that’s without first trying to flush cocaine down the toilet and get some pants on.

Evidence is Not Dismissed

On top of all this, there is no practical remedy for a violation of the knock and announce rule. Even when a defendant can prove that the police did not knock and announce before entering the home, it doesn’t affect their case. The United States Supreme Court has held that violations of the no knock warrant requirement will not result in evidence being thrown out. They said that suppressing evidence is not worth the small value that exists in knock and announcing. So, why have this rule then? Continuing to do something just because they did it in the common law is hardly persuasive. That which is reasonable is not stupid. That which is stupid is unreasonable. The guiding principle of the Fourth Amendment is reasonableness. The no knock warrant requirement is not reasonable in the modern era.

Cases Cited in This Podcast Episode

See also this Illinois case, People v. Glorioso and Illinois no knock warrant statute: 725 ILCS 5/108-8. Plus, learn all about search and seizure topics at the 4th amendment resource page.