Recently, I discussed police dog discovery. I presented that topic as a way to gather the tools necessary to challenge the reliability of a drug dog sniff.

A recent Illinois criminal case on a police dog sniff case suggests it is going to be harder to challenge the reliability of a police dog after all. However, I still want to emphasise that it is not all bad news.

In this podcast episode, I discuss the case of People v. Litwhiler.

The case presented a situation with factors that should have diminished the reliability of the police dog in that case. First of all, the dog “detected” illegal mushrooms. Yet, the dog had no training in the detection of mushrooms!

Personally, I don’t understand how this fact did not play a bigger role in the case. This detail is only mentioned in passing. It is not discussed in an analytically way.

Second, the police dog died four months after the search in that case. Again, this is  a detail that is only mentioned in passing. It seems the fact that the dog may have had significant health problems was completely undisclosed to the defense.

The troubling aspects of the decision is that these factors, although noted by the appellate court, essentially played no role in its assessment of the dog’s reliability.

Police Dog Narcotics Training is Not the Whole Story

It is our job to remind the court that police dog narcotics training is not the whole story.

The case does appear to confirm the defense bar’s concern that it is going to be impossible to challenge the reliability of a police drug dog in court.

I am still holding out for optimism. Thorough police dog discovery should not be abandoned.

In this podcast episode, I suggest that thorough discovery on the dog and the dog handler could provide a pathway to challenge the reliability of the drug dog in court.

Police dog medical records have to be included in any doggie criminal discovery that the defense is demanding.

In my original article on police dog discovery, I did not include a specific request for doggie medical records. Therefore, the first paragraph of that discovery motion should be amended by the addition of the following lettered paragraph. 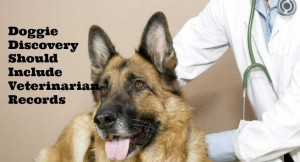 This new front on the Fourth Amendment battle field is not encouraging. The defense bar must do its best to hold-up the line and prevent what appears to be rampant, unquestioned acceptance of police dog reliability.

There will only be more and more of these police dog cases to come. Good luck out there!

For more information, jump over to my resource page on police drug dogs.